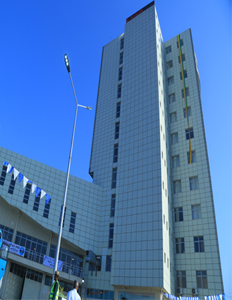 National Alcohol and Liquor Factory, a state owned business enterprise, which has been operating for more than a century is a pioneer in Ethiopia’s liquor industry. The factory is engaged in the production and distribution of Extra Neutral Alcohol (ENA) and various alcoholic liquors of high quality both for domestic and export markets. The factory comprises four branch factories/two of them operational and two of them service giving/ which was once established and owned by individuals in different periods. It acquired its current name after being nationalized by the dreg regime in 1976.

The head office is located in Addis Ababa, ETHIOPIA;at the heart of Mexico square along the artery motor way stretched to “Merkato” behind Addis Ababa Industrial Technology College. Recently the factory is on progress to relocate its head office at Mekanissa to its new  office building.

Akaki branch: established in 1938/not   operational for the time being/

National Alcohol & Liquor Factory occupies a pioneering status signaling a major breakthrough in the onset of beverage industrialization in Ethiopia over the last century. The factory improved its manufacturing technologies and production capacity through time and reached in producing 3.2 million liters of Pure Alcohol & 7.3 million liters of alcohol liquors annually during 2015 using its old machineries. But, at this time the factory realized that liquor products supply to the local market is short of supply in most cases.

The Factory then, started to implement Rehabilitation & Expansion of its old & downsized plant Machineries. The Expansion in addition with the Rehabilitation increased the production capacity of the Factory to more than fourfold of the previous capacity.

Recently, our annual revenue exceeds USD 23 million/665 million birr/. When Sebeta enters into line the revenue will again exceed to more than USD 45 million/1.2 billion birr/. The company’s profit is also expected to rise to USD 14 million/390 million birr/ from its current level of USD 8 million/229 million birr/. It is also contributing to the national economy by paying USD 7 million/197 million birr/ as excise tax. With the launching of the new plant we expect to pay USD 13 million/364 million birr/ excise tax.

Maintaining the production of the best extra neutral alcohol & liquor products and the dominance in the local market and becoming competent in the global market in 2030.

To fully satisfy our customer’s needs and expectation by producing high quality alcohol and liquor products consistently using modern technology by applying modern management system and employing experienced and qualified professionals and also satisfy other stakeholders by creating value as well as enhancing the well-being of the society and protecting the environment to contribute our share for the growth of our country.